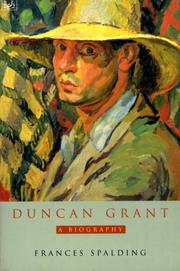 A full-bodied but strangely affectless biography of the minor English painter and decorative artist. As the Bloomsbury industry continues to expand, it’s rapidly running up against the law of diminishing returns. With superior, if not definitive, biographies already in place for all the major figures, only the secondary and tertiary characters are left—though as second-raters go, Grant is near the top of the pile. But his mild artistic abilities will always be overshadowed by whom he knew and whom he slept with. Having already written a biography of Grant’s fellow painter and lover, Virginia Woolf’s sister, Vanessa Bell (1983), Spalding is well qualified to delve into the emotional complexities of Grant’s life. Drawing on letters and diaries, she details his affairs with the leading men of Bloomsbury, from Maynard Keynes to Lytton Strachey to Vanessa Bell’s brother Adrian Stephen, but the love of his life was Bell. Despite his homosexuality and ongoing affairs and her marriage, they set up house together and had a daughter—who eventually went on to marry one of Grant’s former lovers, David Garnett. Such polymorphousness has long attracted biographers to Bloomsbury, but Spalding also spends a judicious amount of time on Grant’s art. She believes that log-rolling praise from intimates such as Roger Fry and Kenneth Clark, paradoxically, was largely responsible for Grant’s reputation plummeting in his later years. Unquestionably, Grant was a decent copyist and a reasonable colorist with a good sense of line and form, but his style tended to ebb and flow with whatever was in vogue at the time, so that it is hard to pin down anything in his work as definitively “Duncan Grant.” Spalding’s biography suffers from a similar problem. Though she has all the facts, she is never quite able to capture the essence of the man. The only thing missing from these hundreds of exhaustively researched pages is Duncan Grant. (8 pages color, 16 pages b&w illustrations)