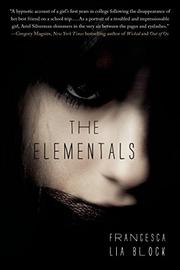 Silver rings, a profusion of flowers, hazy graveyards and perhaps the fae embroider this hypnotic tale.

Block (Pink Smog, 2012, etc.) returns with her distinctively smoldering style. Primarily aimed at young adults, this book may appeal to an adult audience as well, with its shimmering imagery and nimble characterization. On a school-sponsored visit to UC Berkeley, Ariel Silverman’s best friend, Jeni, strangely disappeared. Just as Ariel herself is set to go off to Berkeley, her parents reveal that Ariel’s mother has been diagnosed with breast cancer. Still reeling and numb with grief, Ariel heads to college, determined to pursue the mystery of Jeni’s disappearance. Life quickly becomes a routine of classes, running and passing out flyers with Jeni’s face. To escape frat boys, obnoxious football players and her lascivious roommate, Ariel begins to wander the streets at night. On Halloween, an ominous giant of a homeless man hands her a flyer, an invitation to a party at the House of Eidolon. Given that dorm life is hell, Ariel goes to the party, and there, her life takes a sudden, irrevocable turn. The gorgeously Gothic house is home to three enigmatic graduate students who seduce Ariel into their glamorous lives. Perry, faunlike with his curly hair and sly attentiveness, is a classics major. Bewitching Tania has focused her psychology studies on magic, divination and superstition. Yet Ariel’s eyes lock with those of John, who is studying the continuance of the soul. Worried still about Jeni, Ariel soon finds herself physically compelled to return again and again to her enchanting new friends. Why does she feel ill without them? Who is the giant who seems to be lurking about? What does the tattoo on John’s wrist say? Why is Tania so welcoming? And how does Jeni fit into the puzzle?