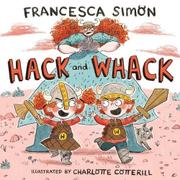 Even Vikings need to sleep.

Not that rumbustious sibs Hack and Whack seem to believe that. When their mother calls them to bed, the children, appropriately hacking and whacking at each other with wooden ax and sword, resist energetically. “NOOOOOOOOOOO! We are HACK and WHACK on the attack!” is their refrain. The pint-sized warriors proceed to lay waste to their village, wreaking chaos on page after page as hapless Viking adults in horned helmets and breastplates look on. Both dialogue (in horned speech balloons) and sound effects emphasize the sound “ack”: “THWACK THWACK / CLICKETY… / CLACK” accompany visuals in which Hack and Whack tip over an occupied (and, judging by the sign on its door, wheelchair-accessible) outhouse. The kids roust all their friends for a climactic melee, after which their mom “sneaks” up on them, “smacks” them each on the head (the blow is not illustrated, but the children are depicted in cartoon-reeling mode, with stars and weaponry circling above their dazed heads), and bathes them before tucking them into their little longship-shaped beds. The story is slapstick violence start to finish, Cotterill’s busy spreads filled with Hack and Whack’s gleeful mayhem. All the Vikings are white, and their uniformly unkempt hair bristles in red, blond, and brown. Hack sports pigtails and a leather dress, while Whack wears short hair and a jerkin; evidently Viking violence is not gender-specific.