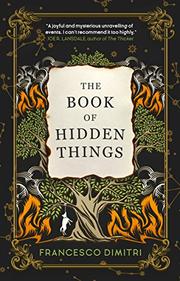 THE BOOK OF HIDDEN THINGS

Mauro, Tony, Fabio, and Art have been friends since their school days in a southern Italian village. When Art, their ringleader, suggests that they return each year on the same date to meet up, they agree, and for 17 years they keep their promise. But when Art is a no-show, memories quickly surface of a bizarre incident from their teen years when he wandered into an olive grove and vanished for seven days. Though Art returned, he was somehow altered, and the town was torn apart by rumors. Dimitri—a well-known fantasy author in Italy who is making his English-language debut here—alternates the story from the perspectives of lawyer and family man Mauro; Tony, a surgeon whose homosexuality makes him an outsider in the strict Catholic village; and caddish fashion photographer Fabio. The reader gets a bird’s eye view of the secrets the men keep from each other, both about their complicated presents and their different understandings of Art’s first disappearance years ago. Is the Mafia involved? The local priest? The mentally ill woman Art was seeing? What of the rumor that Art healed a terminally ill girl before his latest vanishing? And how is his absence tied in to an odd manuscript he was writing called The Book of Hidden Things? In lesser hands, this blend of detective story, organized crime thriller, and supernatural investigation would feel like a grab bag of plot devices, but Dimitri has created a thrilling spectacle that also manages to point poignantly at the way the landscapes we grow up in shape us in ways even beyond our understanding.

A deeply felt look at the idea of home, clothed as a popcornworthy page-turner.