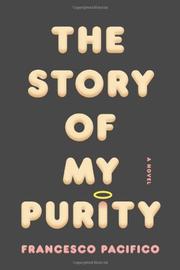 THE STORY OF MY PURITY

Whatever happened to sex? A married right-wing Catholic rediscovers chastity in this slow tease of a novel from the Italian author.

At some point after 9/11, a young Roman called Piero Rosini returned to the religion of his childhood. “[F]ear of the Apocalypse, together with an immense need of love, restored [him] to the flock of the eternal children of Jesus.” There is no elaboration of this moment, though it drives the novel. Piero didn’t just get right with Jesus, he championed sexual abstinence. As for his fiancee, Alice, “our engagement had been desexed, by mutual agreement.” When we first meet Piero in Rome, now married and pushing 30, it’s late 2005. He’s an editor at a right-wing Catholic publishing house marked by a “sophisticated anti-Semitism” that will flower with its forthcoming book The Jewish Pope, a bizarre take on John Paul II. In a jarring transition, but with the support of his wife, Alice, who chooses to stay behind, Piero moves to Paris to work for a similarly reactionary publisher. Sampling the night life, he meets four “bobos” (bourgeois bohemians), young women who talk dirty, do drugs and sleep around. Despite himself, Piero is intrigued by them, especially by Clelia, who’s Jewish, and her uncle Leo, who makes Piero his protégé, Judaizing him, calling him Rosenzweil. The Italian stays chaste, however, passing up many opportunities to make love to the more than willing Clelia, and what might have been the entertaining story of a prude undone by Parisian fleshpots is something less: a portrait of a passive, pampered individual unable to resolve his conflicts. Though Pacifico makes a show of using four-letter words, he won’t write about sex. When the long-suffering, barely characterized Alice visits Paris and makes love to her husband, the astonishing development is dismissed in a sentence. It’s no surprise that the closing section is a chaotic cop-out.

A rambling satire that fails to clearly identify its targets.