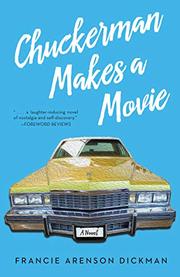 A man writing a screenplay about an unforgettable childhood winter discovers more about his family—and himself—than he ever expected in this comic romance.

In 2002, New Yorker David Melman, a 35-year-old self-proclaimed “marketing and fragrance genius,” isn’t a big film buff, so he’s skeptical when his older sister Marcy suggests that he take a class called “Drama for the First-Time Film Writer,” taught by her friend Laurel Sorenson. But after some pressure, David gives in and enrolls. He initially plans to write about “a perfume maker named Mort Chuckerman who loses his sense of smell,” but Laurel (known to David’s brother-in-law as “The Mormon Rodeo,” for mysterious reasons) suggests that David write instead about the yellow 1970s Cadillac Coupe de Ville that he inherited from his grandfather Slip Melman. Soon, David’s scribbles yield a complicated, zany tale set in the winter of 1977, involving Slip’s banishment from the Men’s Card Room, a game room at his Florida apartment complex; Slip’s wife Estelle’s determination to finally learn to drive; and the antics of a colorful cast of Jewish retirees who make up the Melmans’ neighbors, friends, and enemies. Meanwhile, David dates the Mormon Rodeo, although things get complicated when it’s revealed that she may move to Los Angeles. It’s just supposed to be a fling, but although she’s not his first rodeo, she just might be his last. Dickman’s debut novel is witty and observant throughout, and she packs her prose with sensory detail, as when she describes the aforementioned Men’s Card Room’s “signature stench—humidity mixed with cigars mixed with...stale sweat.” That said, the characters can be stereotypical at times, with an immature hotshot with no time for love, an eccentric artist who shows him a new path, and a bickering but affectionate Jewish family. However, she makes them all feel unique with telling touches, such as Grandma Estelle’s Adidas driving sneakers or David’s “banana boat” creation: a banana stuffed with a Three Musketeers bar.

A funny, romantic story about how “the road you think you’re not taking can become the road you’re actually on.”