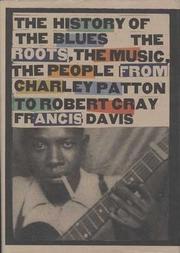 THE HISTORY OF THE BLUES

The Roots, the Music, the People--From Charley Patton to Robert Cray

A quirky inquiry into the nature of the blues. Although written to accompany a three-part series on PBS, this book is more substantive than most TV tie-ins. Davis (Outcats, 1990, etc.), music critic for the Atlantic, divides his investigation into three sections: the ``prehistory'' of the blues; a more or less chronological portrait of leading blues figures; and a discussion of the blues revival and the reasons why an African- American folk art appeals so strongly to a white, urban audience. His approach is highly personal. He begins the book by recounting his trip to Clarksdale, Miss., a mecca for blues lovers in the heart of the Delta country. An outsider to the culture of the blues, Davis invites the reader to share his puzzlement at the deep faith of rural performers (``There are people who grow up actually reading the Bible...who accept what I read as lunatic ravings as both prophecy and literal history''). But he also tries to provoke the reader with outrageous comments, as when he describes Mick Jagger as ``the most famous of contemporary minstrels [who] sings and struts as though trying to get in touch with his Inner Negro.'' The heart of the book is a series of thumbnail sketches of key performers that capture the essence of what makes each performer great. His description of Big Joe Williams is particularly apt: ``He looked like the whale that swallowed Jonah, and sounded like Jonah bellowing to get out.'' Sadly, the accompanying selection of photos is uninspired, relying heavily on oft-published shots. The final section, on the blues revival, is perhaps the most interesting. In it, Davis underscores many of the ironies that occurred when white revivalists ``rediscovered'' the blues performers of the 1920s and '30s, many of whom had to be retaught their own songs because they had long since quit playing. This deserves wide reading among fans of blues and traditional musical forms. (100 b&w photos)