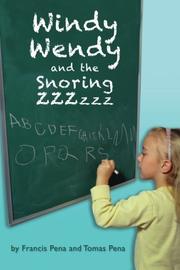 WINDY WENDY AND THE SNORING ZZZzzz

Peña and Peña, in their debut, introduce readers to Windy Wendy in two children’s stories—one a creation myth of the alphabet, the other a suspense tale.

The first story takes place at the first Worldwide Congress, Parade, and Festival of Letters, where the letter Z is feeling a little left out. “It’s not fair that we…are always the last letters to appear,” the letter says. “By the time we appear, most of the children are already sleeping or gone.” But why are they last? It’s all due to a wind named Windy Wendy, who blew her breeze upon the world until letters spontaneously appeared; Z brought up the rear, just as Wendy was falling asleep from exhaustion. Z’s pleas to change up the order of the alphabet are ignored, and the other letters want to punish Z for its demands. However, when Windy Wendy appears at the Congress and starts whooshing once again, Z alerts the other letters about what’s happening. In the second story, Wendy’s cousin and school friends are intrigued about an abandoned house. Legend has it that “anyone able to get in would gain all the knowledge and power of the world.” But such an attempt would be risky, and Wendy, as the voice of reason, urges them all not to do it. The ominous story continues: “They didn’t listen to Wendy, and then the wind came for them. None of them would be seen ever again.” The scene then jumps 20 years into the future, as an adult named Wendy Veronica Williams prepares to accept an award for a book she wrote about her childhood friends. The multiple Wendy characters will help young readers link the two stories, which are both imaginative and suspenseful. However, the Wendys don’t factor into the stories’ main action until near their conclusions. Overall, the two stories don’t fit together very well; one is a simple story about the creation of the alphabet, while the other is a scary story with a cliffhanger. As a result, it may be confusing to read them back to back.

Two intriguing stories that make sense individually but don’t quite work when combined into one book.