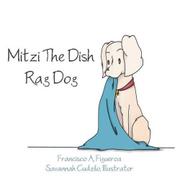 by Francisco A. Figueroa illustrated by Savannah Cudzilo

In this modest new picture book’s disarming dedication, the author credits his wife with inspiring his foray into children’s book writing. It began after she brought home a pup named Mitzi, he writes, “even though she had promised she would not get a dog until after I died!” It’s clear from what follows that Figueroa became an enthusiastic canine convert. The self-described “grandfather and dog owner,” “lover of life and humankind,” and “accountant with a poet’s heart” has crafted what amounts to a love letter to a dog he adores. He depicts her as an affectionate, little canine companion, telling her story in rhyme. Children’s books about dogs abound, and many are more substantive in content and visually original than this effort. However, Figueroa’s very young target audience, and dog lovers in particular, will still get a kick out of seeing Mitzi, the “love dog,” nose a ball, run, bounce, sit up, measure her eight-inch height (“no bigger than a dish rag”) against a ruler, wave her legs in the air to show her soft belly, and give comforting licks and cuddles to her owners. Debut illustrator Cudzilo renders Mitzi in a close-up perspective as a cream-colored, broad-stroke cartoon canine with a red collar and gold tag, giving her a winsome expression that reflects this brief tale’s sweet sensibility. Each simple couplet, divided into four lines and rendered in a pleasant typeface that appears hand-drawn, begins on one page and ends on the next. The book concludes with several white pages, decorated with square, blue borders, which are intended to serve as frames for readers’ own artwork. Figueroa fondly includes his own granddaughter’s crayon portrait of Mitzi as an example and invites readers to get creative and draw pictures of themselves, the story’s canine star (“Now you draw Mitzi”), and the readers’ own pets.

A slight but sweet dogcentric tale that resonates with warmth and sincerity.