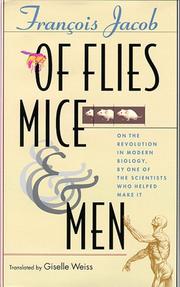 OF FLIES, MICE, AND MEN

A writer of style and substance narrates the transforming events of recent biology in seven inspired essays, neatly translated by Weiss. Jacob, 1965 Nobel laureate in genetics and author of the well-received autobiography The Statue Within (1988), reviews critical findings in biology wrought by two decades of research in genetic engineering. Quoting Lewis Thomas’s suggestion that the importance of a piece of research can be measured by the intensity of the surprise it provokes, his essays underscore the point. It was astonishing, for example, to discover the commonality of genes across species. The master genes that determine the anterior-posterior orientation of a fly’s body (leading to the positioning of organs) are cousins to the genes that regulate body orientation of worms, frogs, and humans. The genes coding for the myriad proteins that build the body’s structure and take responsibility for the body’s chemistry—regardless of species—are variations on some 2,000 bits of DNA sequence, assembled like a mosaic to form an endless variety of proteins (current jargon speaks of protein “motifs,” “domains,” and “modules”). The same recombination of DNA pieces enables the immune system to come up with antibodies suited to whatever new antigen threatens the body. This gives evolutionary biology a new twist, claims Jacob. Instead of regarding each gene as a unique entity, nature continually tinkers with a basic set of DNA bits, coming up with new genes that may be selected for. He reveals this and more about art and science, beauty and truth, good and evil, and our continued quest for knowledge, with telling allusions to literature, myth, painting, and music. Some concluding remarks: “The century that is ending has been preoccupied with nucleic acids and proteins. The next one will concentrate on memory and desire. Will it be able to answer the questions they pose?” If the likes of Jacob remain, there’s hope.