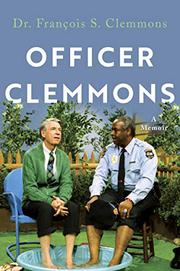 The extraordinary story of one of Mister Rogers’ most groundbreaking and endearing “neighbors,” Officer Clemmons.

Recently, the late Fred Rogers deservedly won posthumous attention thanks to the award-winning documentary Won’t You Be My Neighbor and the Tom Hanks vehicle A Beautiful Day in the Neighborhood. A dear friend of Rogers for three decades, Clemmons offers a firsthand account of his work on Rogers’ show, a story intertwined with the author’s remarkable career as an operatic singer, actor, playwright, and choir director. The autobiography opens with a touching letter from Clemmons to Rogers, thanking him for all of his compassionate lessons. An abbreviated opening recounts the author’s troubled childhood followed by his hard-earned escape to Oberlin College. There, he blossomed both creatively and personally, embracing his homosexuality as well as a deep spirituality that transcended any singular faith. While singing at a church in Pittsburgh, Clemmons met Rogers, about to break nationally with his whimsical children’s show. Recognizing a kindred spirit, Clemmons guest-starred on the show frequently, soon becoming a regular “neighbor” and the first African American to be featured on a children’s program. Clemmons originated his character, the friendly policeman Officer Clemmons, partially as a way to reconcile his frequent conflicts with the police and other authority figures. The author chronicles the friction that resulted from Rogers’ employing an openly gay man on his show, which forced Clemmons to repress his true nature. Nevertheless, their friendship continued to deepen. After Rogers ended a show on a characteristically hopeful note—“You make every day a special day just by being you, and I like you just the way you are”—a spellbound Clemmons asked if he was speaking to him. “Yes, I was,” Rogers replied. “I have been talking to you for years. You finally heard me today.”

A heartwarming story that explores the power of friendship as well as race, sexuality, talent, and identity.