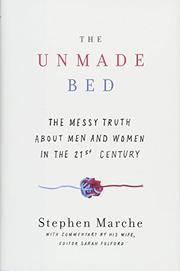 The Messy Truth About Men and Women in the 21st Century
by Stephen Marche
BUY NOW FROM
AMAZON
GET WEEKLY BOOK RECOMMENDATIONS:

Examination of the new roles women and men are playing in the home and the workplace.

When Esquire columnist Marche's wife was offered a job in Toronto, it meant the author (The Hunger of the Wolf, 2016, etc.) would be leaving New York City, good friends, and a teaching job so she could take this important position. It was not an easy decision, but the family decided to move. Marche continued his writing career, albeit a different one than before, while taking on the role of househusband and caretaker for their young son. The author intertwines various personal threads—the births of his children, the death of his father, the importance of his grandfather's watch, the complexity of being a father and husband—with larger issues that confound men as they watch women advance in the workplace and recede, to a certain extent, from the home. Marche addresses sexuality, sexual orientation, and the advances gays and transgender people have made in society; the prolific increase of pornography on the internet and how this is linked to a rise in violence against women; how to let children be themselves while inserting a certain amount of control and conformity; and the slog of necessary chores that falls under the heading of housework. The status of men at work and at home is definitely in flux, and Marche effectively pinpoints the most prominent areas, most of which are familiar to women, who have been struggling to assert themselves for decades. Throughout the book, the author includes footnote comments by his wife, which add a lighter air to the narrative and give it a better sense of balance. The definitions of masculinity and manliness are changing, and Marche's commentaries will help readers understand how.

Satisfying food for thought on the ever changing dynamics of men and women as they interact and go about their individual lives.

THE HUNGER OF THE WOLF
by Stephen Marche
Nonfiction

HOW SHAKESPEARE CHANGED EVERYTHING
by Stephen Marche
Fiction

SHINING AT THE BOTTOM OF THE SEA
by Stephen Marche
Fiction

RAYMOND AND HANNAH
by Stephen Marche

THE DEATH OF FEMINISM
by Phyllis Chesler
Nonfiction

HOW TO BE MARRIED
by Jo Piazza
Nonfiction

MEN EXPLAIN THINGS TO ME
by Rebecca Solnit
Newsletter sign-up