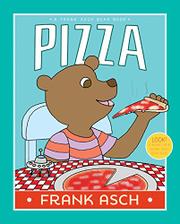 It may be hard for many American readers to believe, but Baby Bear has never had pizza before in this new offering from the beloved creator of Moonbear.

When Baby Bear’s parents take him to a new pizza parlor, their little cub worries that he may not like this new-to-him food. He does like the restaurant—it smells good, and he has a paper placemat to color on while he waits. When his food arrives, his worries are quickly assuaged when he tastes the pizza. Mama asks him if he likes it, and his response is emphatic: “ ‘Like it?’ cried Baby Bear. ‘I love it!’ ” That night Baby Bear sees pizzas in everything around him (the round moon, car tires, even a manhole), and he dreams of fanciful pizzas in his sleep. When he awakens the next morning, his parents offer various breakfast choices, but he rejects them and requests (what else?) pizza. Their chagrined expressions suggest that they see they’ve created something of a pizza monster with the prior night’s dinnertime outing. Fans of Asch’s prior Moonbear and Baby Bear books will recognize the anthropomorphic ursine characters, the art’s style and the simple story structure.

A sweetly simple story that hinges on not just Baby Bear’s appetite, but his imaginative flights of fancy, too.