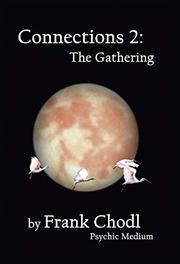 A spiritualist offers more of his insights into the meaning of life and the afterlife.

Chodl follows up Connections (2016) with this sequel chronicling his further endeavors as a self-proclaimed psychic medium. He asserts that he has 15 “Guides,” each from “the Legions of the Archangels” who are “preparing for the next cleansing of this plane”; he says that these Guides help him render aid and make connections between living people and the spirits of those who’ve “passed over” to another plane of existence. Regarding the latter, Chodl professes a great deal of information: “Once we transition from this three-dimensional plane,” he writes at one point, “we will, once again, be reawakened to our connection to the Akashic Field of All Knowledge.” Chodl compares himself to John the Baptist, noting that his job is to “prepare the way” (adding puckishly, “I just have to be careful not to lose my head over it”) and to lay the groundwork for something called the Gathering, a “collective of people (souls), who…have come to the realization that there is a universal truth and access to the sum of all knowledge.” Chodl engagingly describes a world brimming with supernatural elements—one in which the spirits of friends and family who’ve died may contact the living and fill a void in their lives. They also make living people’s later transition to a new plane easier to accept, according to the author: “The familiarity of the loved one smooths the process of transition as it affects the living,” he writes. Overall, the author clearly lays out his spiritual systems over the course of this work. However, at one point, he quotes the famous maxim that “Everyone is entitled to their own opinion; no one is entitled to their own facts,” without offering convincing evidence for the factual basis of his book’s claims. Even so, even skeptical readers will find that his narrative is never less than interesting.

A dramatic and often absorbing theory of the spirit world.