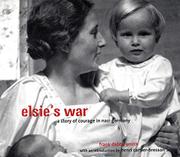 A Story of Courage in Nazi Germany

Using historical photographs from various sources, Dabba Smith offers an ungrounded profile of a German woman who helped people oppressed by Nazis during WWII. Elsie brought food and blankets to Ukrainian women forced into slave labor at her father’s factory, and she risked her life trying to arrange the escape of a German Jew across the Swiss border. Caught and imprisoned by the Gestapo, Elsie spent time in jail away from her children and father before a bribe facilitated her release. While stories of Germans who helped the Nazis’ victims are rare, this piece is so episodic that it isn’t cohesive. The confusing lack of context—about the greater war, horrors, concentration camps, and other pockets of resistance—leaves Elsie looking like an isolated hero. Bits of fictionalization belong to an earlier era of children’s nonfiction. Inoffensive as an addition to a broader curriculum, but—unlike Dabba Smith’s stunningly powerful My Secret Camera—mediocre on its own. (introduction, postscript) (Nonfiction. 8-12)