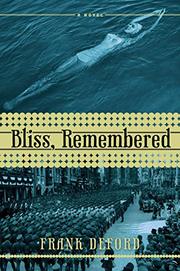 Sportswriter and novelist Deford (The Entitled: A Tale of Modern Baseball, 2008, etc.) returns to fiction with a love story set at the 1936 Olympics in Berlin and stateside during World War II.

The author scored his greatest success with the 1981 football-themed novel Everybody’s All American, which was made into a movie starring Dennis Quaid and Jessica Lange. In this, his first novel since The Other Adonis (2001), he combines sports and fiction once again—this time focusing on the world of Olympic swimming. Sydney Stringfellow is an 18-year-old American swimmer who falls into an affair with German Horst Gerhardt while at the 1936 Games. Sydney returns to the States and later receives a breakup letter from Horst; heartbroken, she moves on with her life and gets married to an American—only to later learn a secret about Horst, eventually leading Sydney to commit a terrible act. The story is told by a cancer-stricken 86-year-old Sydney to her daughter Teddy in 2004. Teddy narrates the novel in the present day, remembering her mother’s tale and interjecting her own reactions to her mother’s shocking secrets. Sydney’s recollections, though at times melodramatic, are engaging, particularly when Deford portrays real-life historical figures—such as Eleanor Holm, the talented and confident American swimmer who was suspended from the 1936 competition, and Leni Riefenstahl, the brilliant and chilly German filmmaker. He also effectively invokes the atmosphere of 1936 Nazi Germany as World War II loomed. But the framing device of the novel can be distracting, and some may find the modern-day scenes less interesting than the glamorous flashback material.