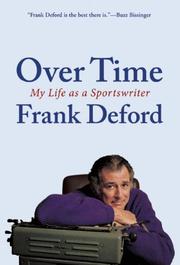 My Life As a Sportswriter

The prolific sports commentator returns with an episodic, anecdotal memoir.

Deford (Bliss, Remembered, 2010, etc.) is an amiable travel companion—sometimes sharp, witty, even irreverent (twice he slams big-time college sports for corruption and even for trivializing American education)—but for the most part here he’s on cruise control. Although he takes us back to his school days (he knew in third grade he could write) and high-school sports career (he had one good season in basketball), and writes breezily about acquiring, fairly easily, his editing gig at Sports Illustrated, he offers no real detailed, sequential account of learning his craft. Deford is principally interested in telling stories, a few jokes and a few poignant recollections. He recalls, for example, his very close relationship with Arthur Ashe and how he, John Feinstein and some others covered up Ashe’s AIDS battle until the story finally broke elsewhere. He also remembers a touching moment when Magic Johnson refused to let a press conference end until veteran journalist Jim Murray could ask his question. He relates some stories about sportswriters from earlier generations (Grantland Rice, Ring Lardner) and describes the shift in sportswriting from cheerleading to criticism. He also writes about the diminished state of print journalism (and his own failed paper, The National) and the adjustments he’s had to make—from print to radio to TV to the Internet. Celebrities of all sorts populate the pages—Howard Cosell, Mickey Mantle, Dean Smith, Ted Williams, Bobby Orr, Carl Lewis, Jimmy Connors, Bobby Knight—but only rarely does Deford strip the bark to see what lies beneath.

A throwback jersey of a book.