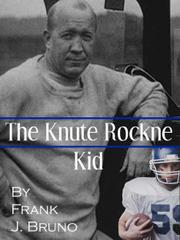 Bruno’s (Think Yourself Thin: How Psychology Can Help You Lose Weight, 2015, etc.) latest novel is an engaging coming-of-age story about a California teen bordering on adulthood just after World War II.

Mario Calvino is his school’s starting quarterback and is dating a cheerleader, neither of which feels right to him. Mario has higher aspirations: “I had just told my mother that I was thinking of not playing football in my senior year. Not a big deal? Wrong. It was a very big deal.” His father, the head football coach, needs a winning season to help with getting tenure. “I didn’t want to let him down,” Mario says. He wants to be a doctor, so he knows that he needs strong grades. Mario also knows that a concussion from football wouldn’t help him meet that goal. Bruno smoothly guides Mario—dubbed the “Knute Rockne Kid” by a local sportswriter—through this obligatory final season as he matures while falling out of and in love and learning about decisions and their consequences. Bruno convincingly characterizes Mario’s close-knit Italian family and his friends, and in a description of Mario’s father: “My father was about six-foot-two. He had a square-cut face dominated by a hawkish nose. There was an air of power and distinction about him. He gave off masculine charm the way a sparkler gives off sparks. And he knew the power he had over people.” Bruno also allows characters young and old to evolve throughout the novel, most finding themselves in a better place by the end. Despite a handful of tragedies, the narrative offers a winning air of optimism. Mario’s bumpy journey to manhood proves to be an enjoyable one for readers.

A pleasant trip to an earlier era that shows how simpler times were still complex.