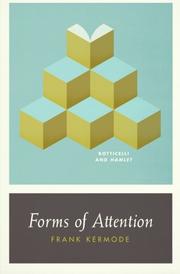 How the canon of literature (or art) is established, how it continues, and what critics do with it: a trio of remarkably cogent and stylish essays (originally the Wellek Library Lectures at the U. of California, Irvine). Kermode begins with a look at the 19th century's rediscovery of Botticelli, "in which, roughly speaking, one sees learning come belatedly to the maintenance of values established by ignorance." "Learning" refers to the work of two very different scholars, Herbert Home and Aby Warburg. "Ignorance" was the amateurish enthusiasm of people like Swinburne, Burne-Jones, and most notably Pater, who rhapsodized over Botticelli for silly reasons (The Birth of Venus reminded Pater of Ingres) or confused him with other painters. Thus not scholarship but chance or unenlightened opinion brought Botticelli into the canon. In his second piece, Kermode does a virtuoso survey of doubling in Hamlet through character (Hamlet-Laertes, Rosencrantz-Guildenstern, Cornelius-Voltemand), action (plays within the play), and diction (constant use of puns, echoes, hendiadys, etc.). The point of this catalogue is that it never occurred to and would probably have seemed trivial to earlier commentators, which only shows how canonical works live by giving rise to an endless and constantly changing "conversation." In the final essay, Kermode concludes that Dr. Johnson's ideal of forming a canon by distinguishing between what "is established because it is right" from what "is right only because it is established" is a forlorn hope, that we can never transcend our own historical standpoint (as Home and Warburg thought they could). Interpretation, as Paul de Man said, is only the possibility of error, and all interpretations are useful if they foster "certain necessary forms of attention." Effortlessly learned, brilliantly allusive, a model of critical self-reflection.