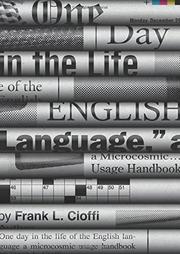 ONE DAY IN THE LIFE OF THE ENGLISH LANGUAGE

Acknowledging that there are many books imparting grammar and usage rules, Cioffi (Writing Director/Baruch Coll.; The Imaginative Argument: A Practical Manifesto for Writers, 2005, etc.) set out to do something different: “provide a human voice chatting about those rules, one that used real-world rather than manufactured language as its model, and one that tried to show how using language carefully can make a difference in terms of human interactions.” The author’s 300 real-world samples come from newspapers (USA Today and the International Herald Tribune recur) and magazines (Sports Illustrated, the New Yorker) from Dec. 29, 2008, a day he chose “because of its very ordinariness.” Although some of the sentences refer to movie stars, bank failures, sports events and other trendy topics, the selections, taken out of context, are sometimes more confusing than the grammar rules they’re supposed to exemplify. Cioffi’s goal of being chatty is amply fulfilled, but there’s a disconnect between that breezy tone and his explanations of grammatical points. Although the author says he assigns the book in a first-year writing class, his audience seems to be fairly sophisticated working adults (don’t correct your boss’s grammar, he advises) who may feel anxious about how others “judge and categorize” their social class, education and intelligence by their grammar proficiency. Besides six chapters covering fundamentals of grammar—parts of speech, punctuation and diction—Cioffi includes a glossary of 50 key terms that he already has defined in the text. One appendix debunks 15 grammar myths, many of which can be boiled down to the assumption that grammar doesn’t matter in the age of tweets and self-publishing; another appendix offers hints about how to use the book as a classroom text.

A teacher’s help would be required for students to find this book useful.