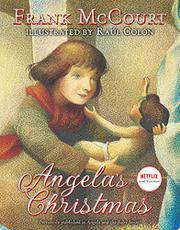 Like his Pulitzer Prize–winning title, Angela’s Ashes (1996), McCourt’s picture book (first published in 2007 as Angela and the Baby Jesus) draws on his mother’s life. Recently adapted as a Netflix animated film, the story is now rereleased with a new title. In both versions, Colón’s delicate, sure watercolor, colored pencil, and lithograph pencil illustrations lend light and warmth to the story of a little girl’s worry that the baby Jesus in her church’s Nativity is cold. Filled with good intentions, she absconds with the figurine and hides it in her warm bed. Rich dialogue that captures the characters’ Shannonsider brogue enlivens McCourt’s storytelling while subtle characterization evokes tender familial dynamics. Angela’s elder brother, Pat, characterized as mentally disabled, sees her with the baby Jesus and tells their mother, who initially says he has “a great imagination.” Angela is upset when he persists and gives away her secret. Alarmed, but sure of her daughter’s benevolence, Mammy marches the family to the church to return the baby Jesus, where they encounter the priest and a policeman searching for the thief. The resolution hinges on Pat’s benevolence when he misunderstands the policeman’s gentle ribbing that his sister will go to jail and offers himself in her stead.