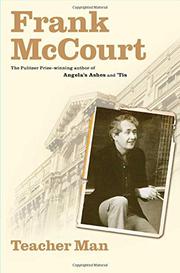 McCourt’s latest memoir focuses on what ’Tis (1999) gave short shrift to: his life as a teacher.

The same dark humor, lyric voice and gift for dialogue are apparent here as McCourt tells the tale of a 30-year career teaching English in New York City high schools. He begins with his scary first day facing a roomful of 16-year-olds at McKee Vocational and Technical High School on Staten Island, where his job was to teach five English classes per day to teenagers preparing for futures as plumbers, carpenters and auto mechanics. The year was 1958 and McCourt was 27, just out of New York University. One doesn’t have to be a teacher to relish his account of how reading the students’ obviously self-authored absence excuses inspired him to create a composition assignment they couldn’t resist: write a note of excuse from Adam to God. After eight years of stifling bureaucracy at McKee, McCourt taught briefly at New York Community College in Brooklyn, Fashion Industries High School and Seward Park on the Lower East Side. At 38, he left for a doctoral program at Dublin’s Trinity College, returning two years later without a degree. (That misadventure could fill another book.) After drifting as a substitute teacher for a year, he landed a job at prestigious Stuyvesant High School, where thousands of the city’s top students compete for a few hundred spots. McCourt’s self-deprecating tone diminishes in this section, for now this innovative teacher is given free rein, and it is clear that he’s having a grand time. He recalls an unforgettable vocabulary lesson involving a picnic in the park with ethnic foods brought by students in his creative-writing class, and a recipe-as-poetry class in which students read recipes aloud to the accompaniment of assorted musical instruments.

The teaching profession’s loss is the reading public’s gain, entirely.