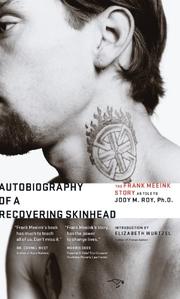 AUTOBIOGRAPHY OF A RECOVERING SKINHEAD

Meeink spent most of his childhood being knocked around in South Philly by his stepfather and running from gangs between his bus stop and his grade school. By age 20, the author was the leader of Strike Force, a local chapter of the Aryan Nation. “I felt the rage boiling inside me until I thought I was going to puke or scream or die…We are footsoldiers in God’s army. Right. Left. We are the enforcers of God’s law. Right. Left. Our race is our fucking religion,” he writes. He had already had his own cable-access show, escaped from a mental institution, been to prison and attempted suicide on more than one occasion. Since skinheads associate drug use—not including alcohol—with minorities, Meeink was vehemently opposed to using drugs. However, as soon as he left the “movement,” without the Neo-Nazi ethos and peer pressure to keep him in check, Meeink floundered into a daily drug habit, supplied at first by his addled mother. He is now a recovering skinhead and a recovering alcoholic and drug addict. His debut is a boot-stamping march through desperation, hate, violence and salvation, covering his rise to skinhead stardom and his eventual recovery from his destructive vices. Since 1995, the author has been teaching children and young adults about the consequences of conformity and the regrets of a misspent youth. He runs Harmony through Hockey, a community-outreach program endorsed by the Philadelphia Flyers that teaches children the values of unity and equality. It is through his organization that Meeink’s gentler side takes over, demonstrating how much a strong will can be misdirected with hatred and how difficult it can be to redirect it with love. Indelicate and harsh, but never preachy or whiny, this is an intimate, uncompromising memoir. Though it hits some predictable notes—mostly because of Edward Norton’s familiar character in American History X—it speaks forcefully from experience.