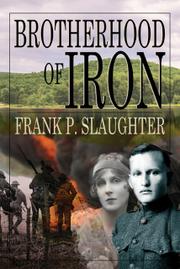 From the The Castor Family Trilogy series, volume 2

Slaughter (Echoes of Distant Thunder, 2011) continues the saga of the Castor family against the backdrop of World War I and the mining industry.

Two generations removed from Will Castor, the haunted veteran of the Civil War’s Battle of Chickamauga, the Castors have become a prominent family in the mining town of Ishpeming, Michigan. When a conflict even greater than the War Between the States breaks out in Europe, two of the Castor boys answer the call: John, a shy, studious young man whom the other Marines call “Teach,” and Matt, a charming rake who’s popular with his fellow soldiers as well as with the farm girls of France. On the home+front, their brother Jacob commits a taboo by asking to marry their adopted sister, Rosemarie. Another brother, Bill, runs off to sail the Great Lakes but descends into a listless life of women and booze. In Ishpeming, their father, Robert, attempts to hold the family together while managing the town’s profitable, if dangerous, mine for a Cleveland-based mining company. As pressures mount at home and abroad, the family members are pressed to the limits of their strength, locked in a struggle against the complex, deadly industry of man. The author again demonstrates a remarkable knack for period details—from contemporary slang and popular dances to the equipment and routines of the mining industry—and a powerful ability to render battlefields in all their terrible, peculiar horror: “Sporadic enemy shells had begun to land close by….They were not the earth-shaking detonations of high explosives; they were the dull thuds of gas shells.” As in the previous novel in the Castor Family Trilogy, the real war here is internal and lasts long after shots have ceased to ring out; it’s fought in the minds of those lucky (or unlucky) enough to survive. With this story, however, Slaughter is able to expand beyond the effects of war on one person to explore their repercussions for an entire family—a clan that holds sacred its responsibility to protect its members from harm.

A sharp, immersive family drama played out against the ravages of war.