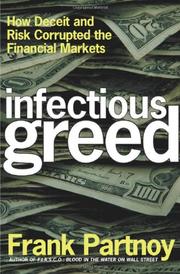 How Deceit and Risk Corrupted the Financial Markets

With hours of expert testimony on Enron before Congress under his belt, Partnoy (Law/Univ. of San Diego) also draws on his own experience in selling the arcane contracts known as derivatives to put an investor’s dilemma into perspective.

The author’s previous work, F.I.A.S.C.O.: Blood in the Water on Wall Street (not reviewed), warned of the dangers inherent in financial instruments created for the sole purpose of allowing companies to evade financial regulations. Here, he goes back some 17 years, naming the University of Pennsylvania’s Wharton School of Business, Bankers Trust, its CEO and chairman Charles Sanford, and his wunderkind, Andy Krieger, as key figures in the origination of the kinds of investment banking deals and “swaps” that eventually snared firms like Enron, Worldcom, and others. As the banks soon found out, the temptation for companies to place bets on interest or exchange-rate fluctuations in order to fund business ventures as cheaply as possible was irresistible from the start. Partnoy makes it appallingly clear that as these hedges against debt have evolved and become increasingly convoluted, the number of takers who will never understand them, much less profit from them, has continued to swell. For example: one structured note’s terms included a variable based on the number of wins by the NBA’s Utah Jazz. Partnoy makes a telling point in stressing that Enron’s deals and those of other now-scandal-plagued companies were basically not illegal and were all enumerated in annual reports in some occluded form or other. Perhaps the worst news for investors is that in Partnoy’s view the government’s response, last summer’s Sarbanes-Oxley Act, was “weak and limited” because Congress “had no blueprint” and was merely responding to public pressure to place blame. The markets today are “like Swiss Cheese,” he claims, “with the holes—the unregulated places—getting bigger every year as [rules beaters] eat away at them from within.”

Riveting, for those who can persevere through the slack prose.