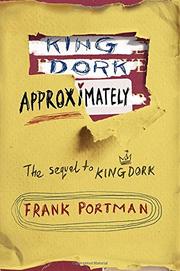 Tom Henderson’s new adventure begins where King Dork ended: in 1999, after a brutal tuba attack preceding the Christmas vacation of Tom’s sophomore year. Despite his brief sexual successes before this volume’s opening, he’s still alone but for his only friend, Sam. Their dork solidarity against the “normal” tormenting thugs of Hillmont High is doomed, however. The fall semester’s scandals have led to Hillmont’s closure, and the two boys are off to separate high schools. Now Sam’s listening to getting-the-girl motivational tapes, giving Tom advice steeped in toxic misogyny. Tom’s disturbed by Clearview High’s seemingly sincere school spirit; it reminds him of the perky normalcy of Happy Days or Grease. Tom gets his first girlfriend and discovers that getting along with others is not all it’s cracked up to be. He’s a CD-hating, vinyl-worshipping proto-hipster who, along with Sam, refers to his favorite albums by catalog number—“I actually might like EKS 74071 better than EKS 74051”—guaranteeing that neither their classmates nor the novel’s readers will be able to participate in the conversation. Meticulously described historical elements—Tom’s sister’s obsession with the family landline, the boys’ hatred of modern CD music formats, Sam’s dorky, holstered, clunky cellphone—are conspicuous in this otherwise modern-seeming story.

This plotless, grandiloquent slice of life will appeal to readers working their way up to Ayn Rand and Tom Robbins.