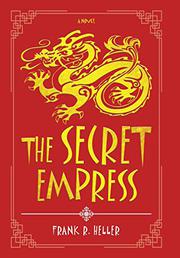 In Heller’s debut thriller, a retired CIA operative is recruited to protect the secret heir to China’s dynastic throne from ruthless gangsters.

Joe Wilder was once a government agent as well as a bodybuilding champion, but he’s now the founder of a billion-dollar health and fitness conglomerate. He receives word that the Chinese government plans to excessively raise the price on his contracts in Guangdong, so he immediately travels there to meet with Wen Shu Xian, the local deputy minister of trade, in order to plead his case. However, it turns out that the contracts were merely a ruse, and the minister, who goes by the name “Wendy,” reveals that she’s secretly the empress of China—the daughter of Emperor Puyi, the last emperor of the Manchu Qing dynasty. She also has a 12-year-old son and heir, Chao Li, nicknamed “Charley,” whose very existence is kept under wraps, as many people would attempt to either kill him or exploit him for personal gain. Wendy asks Joe to bring Charley to the United States, where he can live freely, without fear. Joe accepts the assignment—one for which he is well-suited, given his past as an accomplished CIA field operative. However, Wendy is found dead shortly afterward, and the Bai Lang, a criminal organization that dates back to the Opium Wars, unleashes a menacing, German “covert assassin,” named Max Sterne, among others. In this thriller, Heller conjures a remarkably ingenious premise with the secret Chinese dynasty, and he always makes sure that the plot races forward at a blistering pace throughout the novel. Along the way, he provides readers with equal measures of suspenseful and action-packed sequences. The author’s knowledge of Chinese history and culture is impressive, and even when the story doesn’t seem entirely plausible, it’s never so dubious as to be distracting. That said, the prose style can be overly earnest at times: “Who are you kidding? he thought. You’re enjoying the intrigue and the danger!” Even so, the tale remains consistently dramatic and engrossing throughout.

A tale of intrigue that’s thrilling enough to overcome its lack of realism.