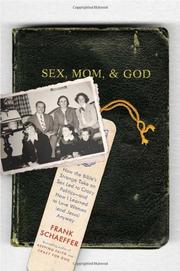 In the third installment of the “God Trilogy,” prolific novelist and nonfiction author Schaeffer (Patience with God: Faith for People Who Don't Like Religion (or Atheism), 2009, etc.) tells “the truth” about his mother’s curious impartation of religion and sex.

The author’s mother Edith played as much a spiritual role as his father, the late Evangelist Francis Schaeffer, and continues to do so at 96, though her memory loss and sight deterioration defy them both. The book shines in sections centered on Edith, a “life-embracing free spirit” whose sexual education of her son began with a show-and-tell of her diaphragm to him at age eight while on a family vacation. This candid abandon extended to matters outside of sexuality as well. The author distinctly remembers Edith praising a God that foreknew and condoned the miscarriage of her first male child in favor of subsequently giving birth to Schaeffer. He attributes life growing up with three sisters as vital to his affinity for women in later years, though they usurped too much of his parents’ time and attention back then. As a woman who’d sacrificed a dancing career to become a religious juggernaut, Edith’s fiery personality and sexual extroversion were contradictory to the piousness that defined her, yet she managed to formulate extraordinary interpretations. From advising women to wear sheer, black lingerie to keep their husbands’ interest to confessing Francis’ sexual demands on her—all were justified with biblical significance. A consummate memoirist, Schaeffer fills the narrative with interesting anecdotes about his sex life, like a nervous first-time encounter with a French woman and the ice-girl he fashioned (and attempted to mate with) while growing up in the Swiss mission his parents founded. The author’s heated rejection of modern Evangelicalism and discussions of abortion, Reconstructionist movements and even Sarah Palin rob the memoir of the loving glow cast by Edith’s legacy, but the sage conversation on a New York–bound bus with a distraught Asian girl is warmly resonant and a befitting conclusion to an occasionally disjointed book of ruminations, memories and frustrated opinion. Sweet and savory familial adoration.