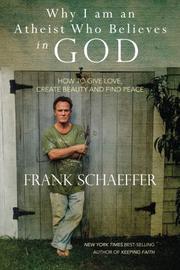 Why I am an Atheist Who Believes in God

How to give love, create beauty and find peace

A faith-oriented autobiography with an unconventional approach.

“All we have is our stories,” writes novelist Schaeffer (Crazy for God, 2008, etc.) in this entertaining, energetic new memoir. He follows through on this point by filling his book with story after story, all told with the clarity and catchy pacing of a born raconteur. There are tales of his wry, wisecracking mother; his wife, Genie; his grandchildren Lucy and Jack; and his friend, the artist Holly Meade, whose unexpected death, he writes, “broke through my innermost protective layer of denial.” There are more complex reminiscences about his life as a professional writer; among his many books is the quite good 1992 novel Portofino. But the stories that cast the longest shadows are those about his straight-laced religious upbringing as the son of evangelical missionaries. At one point, he confesses, a bit ruefully, that “[m]yth or not, I sometimes like the result of my parents’ delusions.” Fairly early in life, he abandoned strictly conformist religious attitudes, and after “fleeing the evangelical machine,” he embarked on a broader, more ecumenical inquiry into the nature of faith and spirituality, which fills much of this new book. Interwoven with his personal stories, he sketches an appealingly open-minded and even paradox-embracing approach to nonbelief: “An agnostic neither believes nor disbelieves in God,” he writes. “I’m not that person. I believe and don’t believe at the same time.” The book is often plagued by the unavoidable vagueness that accompanies such philosophizing, but Schaeffer’s essential levelheadedness always asserts itself to prevent excessive spiritual navel-gazing: “If we wait for correct ideas to save us—theological or otherwise—we’ll never be saved, even from ourselves,” he writes in a typically winning passage.