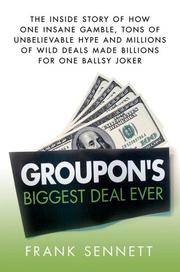 The Inside Story of How One Insane Gamble, Tons of Unbelievable Hype, and Millions of Wild Deals Made Billions for One Ballsy Joker

A fast-and-furious account of how Groupon and its young founder bucked acquisition trends by rejecting a $6 billion buyout offer from web titan Google.

A justifiably dramatic look at the machinations of a resoundingly successful startup and its “Andy Kaufman of CEOs.”