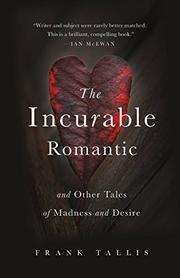 And Other Tales of Madness and Desire

A veteran clinical psychologist in the U.K. recounts some of his cases involving those tormented by Cupid, Eros, and all the other love gods who meddle in our affairs.

In his latest, Tallis—who has published both novels (Mephisto Waltz, 2018, etc.) and works of nonfiction (Hidden Minds: A History of the Unconscious, 2012, etc.)—deals with an assortment of cases, ranging from a man devastated by a breakup to a pedophile to those suffering from unrequited love. Throughout, the author maintains an appealing self-deprecation. He regrets things he said (or didn’t say); he realizes he’s not being effective; he worries about the patients who left his care for various reasons. He also displays evidence of his wide reading, and not just in the literature of psychology. He alludes to such figures as Thomas Mann, Shakespeare, Goethe, and Agatha Christie. He also includes elements of his own biography: We learn about the breakup of his first marriage, his two sons (more than 20 years apart in age), and his education and experiences in a variety of clinical settings. But the patients’ stories remain prominent as Tallis explores the physiology and the psychology of human love. He discusses Darwinian aspects of it, and he chronicles his observation of a human brain (do slivers of memory remain?). Mostly, the author reveals how difficult it is for us to deal with imperfect love—i.e., with virtual types of love. Doubt, jealousy, depression, guilt, regret, ebullience—all course through the narrative. We also see how reluctant we can be even to talk about these emotions and experiences. Tallis’ patients—like the rest of us?—conceal and modify and even prevaricate as they tell their wrenching love stories.

Moving, at times disturbing, and revealing—like having a productive, revelatory discussion with a trusted friend.