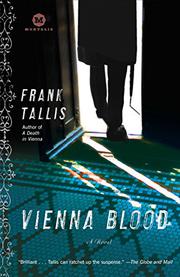 Police inspector Oskar Rheinhardt is called to a modest house in the rundown Spittelberg district where a madam and three young prostitutes have been brutally murdered. The only definite clue is an enigmatic symbol scrawled on a wall. (It takes Sigmund Freud himself, chapters later, to identify it as a swastika, from the Sanskrit.) As in previous cases, Rheinhardt consults brilliant psychotherapist Max Liebermann, a classically trained pianist who also provides the accompaniment for Rheinhardt’s singing on their musical evenings. Because the weapon appears to be a saber, Rheinhardt begins with the questioning of a swaggering company of military officers. Amelia Lydgate, a feminist doctor with a knowledge of advanced forensic techniques, helps with blood analysis. Liebermann, recently engaged to the beautiful Clara, finds himself inconveniently attracted to the vibrant physician. Two more murders, of a Czech street vendor and the Nubian servant to an influential professor, confirm the presence of a serial killer but bring Rheinhardt no closer to his identity. Could he be connected to Vienna’s recent upsurge of xenophobia, or to the bizarre zoo killing of boa constrictor Hildegard, the emperor’s favorite snake, ritualistically cut into three pieces?

In this intricate sequel to the award-winning A Death in Vienna (2006), Tallis uses his knowledge of medicine, music, psychology and history to create an endlessly fascinating portrait of 1902 Vienna.