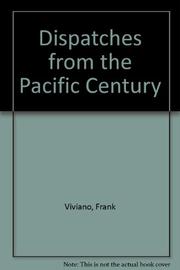 DISPATCHES FROM THE PACIFIC CENTURY

Nineteen brief but resonant vignettes of life in the Pacific Basin as the area is transformed by its entry into the world of international trade and finance. Drawn from Viviano's experiences as a reporter for the Pacific News Service and San Francisco Chronicle, the larger story of economic development, societal change, and shifting values is captured here in the day-to-day lives of such individuals as a former Red Guard, a Taiwanese bok-choy farmer-turned-entrepreneur, and a Hmong tribesman transferred from the Laotian highlands to California's Silicon Valley. Temporarily assigned to the Far East in 1979, Viviano quickly becomes fascinated by Asia, and his sojourn eventually stretches to 12 years. During his stint, the sharp-eyed author travels to the tottering People's Republic of China during the Tiananmen Square demonstrations, to the Philippines of the newly installed Corazon Aquino, to the Las Vegas/Atlantic City glitz of China's ``fleshpot'' resort of Xiamen. In every venue, Viviano manages to interview individuals whose lives are being transformed by the events around them, and he's continually on the alert for ironies and irrationalities—as highlighted, for instance, in his discussion of Singapore: ``It was amusing, in these years of Washington's Evil Empire rhetoric, to hear Ronald Reagan cite Singapore as a sterling example of the achievements of free enterprise, when it was actually one of the most thoroughly socialistic nations on earth.'' Viviano also points out that, although the Gulf War prevented him from doing so, James Baker was scheduled to take part in an expedition in Mongolia to hunt the seriously endangered ibox. Marred slightly by the author's reticence about his own life; otherwise, a satisfying work that's less scholarly but perhaps even more effective than Stan Sesser's The Lands of Charm and Cruelty (p. 359).