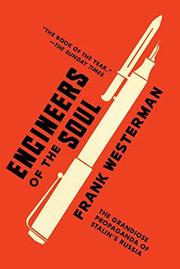 ENGINEERS OF THE SOUL

In the Footsteps of Stalin's Writers

A former Moscow correspondent for a Dutch newspaper conducts a literary travelogue revealing a remarkable geography and a strange, fraught alliance when the pen was not as mighty as the hammer and sickle of the Soviet Union.

“Engineer” was the Soviet profession of choice when Stalin designated his cadre of writers “engineers of the soul,” purveyors of instruction and inspiration to the reading proletariat. Social Realism, in narratives that were not exactly fiction and not quite fact but always orthodox opinion, extolled socialist hydraulic engineering and the correct means of production. Heroics, history and hydraulics were aligned in the patriotic service of the Motherland. The arbiter of the works of the Red army of writers was Maxim Gorky, the Father of Soviet letters and chief of the Union of Soviet Writers. Brigades of hacks were dispatched to distant construction sites, and popular titles included Cement, Energy and The Hydroelectric Plant—those were novels, not to be confused with the purportedly factual The Great Waterways of the Soviet Union. One book, authored by a collective, celebrated the hopeless reconfiguration of Kara Bogaz, a salty bay of the Caspian Sea in what is now Turkmenistan. Westerman (Ararat: In Search of the Mythical Mountain, 2010) aligns the chronicles with the facts and locales to unearth the truth beneath the fanciful tales. The author examines the sad example of Konstantin Paustovsky, who wrote of the salt flats of Kara Bogaz from a distance. It was the era of the NKVD, Kremlin show trials and the Orwellian Ministry of Truth, and tons of offending texts were pulped.

An insightful history of the lives, times and works of some authors now virtually forgotten in the West, and a valuable addition to the study of Soviet letters.