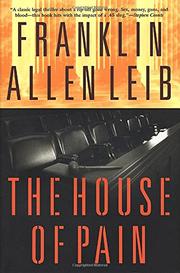 THE HOUSE OF PAIN

A so-so legal thriller by Vietnam vet Leib (The Fire Dream, etc.) that begins better than it ends—with a kidnaping in which the kidnappers are . . . kids. At the start, it’s nothing more than a prank. Fifteen-year-old Sally Collins (who may be the most ungrateful daughter since Goneril) conceives of a scheme to get back at her parents for sending her to an expensive private school (and for objecting to her habit of sleeping around). Conspiring with three pigheaded coevals, she arranges to have herself snatched while none other than her shocked and terrified mother looks on. That brilliant stroke successfully completed, one of the three, Sally’s anointed lover, makes the contact: —Half a million, or she dies.” Trouble is, Edwin Collins doesn’t have the money his awful daughter thinks he does. He had it once, but a series of ill-timed real-estate deals have wheeled him into a financial no-man’s land. There is, however, a useful neighbor on hand: he’s called “Crazy John” for no reason more substantive than that he’s a Vietnam vet still in the grip of post-traumatic stress disorder. John agrees to help, but when he goes after the kidnappers (unaware that they’re juveniles), he suffers an episode. For a terrible moment he confuses Vietnam with the plush Connecticut suburb where they all live. He fires—and, tragically, he kills. The police take him into custody—he makes no resistance—and soon an ambitious prosecutor is seeking his death with all the single-minded purpose of a man who has caught the scent of political capital. In the story’s last half, John will be defended, ironically enough, by people more convinced of his innocence than he himself is. Some good ideas are shortchanged by Leib’s heavy hand, which makes for limp dialogue and few nuances.