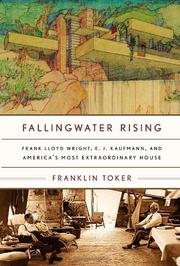 A cerebral, spiritual, and social pilgrimage through Fallingwater and the long shadows cast by the two personalities who brought the great home to fruition.

It rises beside a stream in western Pennsylvania, an architectural icon of cognitive dissonance, the thrusting lines cutting through the unruly rusticity: “Pittsburgh-on-Bear-Run,” Fallingwater. A piece of man-made sublime, architectural historian Toker suggests, it is a counterfoil wedding industry to nature. Yet Toker’s story of Fallingwater is not solely, or even primarily, about the building of the masterpiece (though he goes to great lengths to draw out the legion of influences, starting—and ending—with Frank Lloyd Wright), but about how the house pumped oxygen into Wright’s career after the eclipse of the European stylists and catapulted E.J. Kaufmann past anti-Semitic snobbery: “His fixed strategy was to use architecture to raise his social status” and to use Fallingwater as a commercial showcase to demonstrate “nothing more than simple adherence to the merchant’s creed,” though also emphasizing Kaufmann’s role as patron. Toker softens the edge of the characterizations here with profiles that make Wright and Kaufmann human, “in their own moral universe,” sparking “eccentric and self-indulgent lifestyles.” Fallingwater, too, becomes a living thing through Toker’s intimate wording: a wondrous creature, exquisitely tuned to the site. As for the client: “It would be hard to find a house plan that better chartered the dynamics of a dysfunctional family.” Toker sees Fallingwater as a symbol of hope for all Americans during the black heart of the Depression, escapism at its best, even, thanks to the publicity machine of Time and Life, “a patrician dwelling that passed for the abode of one of the people.” Finally, Toker ably skewers E.J. Kaufmann Jr.’s self-serving bluster regarding his role in the project.

Digging into personal and architectural history, Toker demonstrates spadework of the highest, most exacting, and refined order. (16 pp. color and 150 b&w photographs)