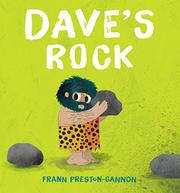 “This Dave. / Dave love rock. / … / Dave’s rock bigger” than Jon’s rock. But “Jon’s rock faster” when thrown. Both pick up new rocks, with unsatisfactory results. Then Jon suggest both carve rocks into same round shape and Dave add hole in middle—make fine game tossing at upright stick! Jon and Dave go off arm in arm. Considering that Preston-Gannon starts the episode off with a quote from Mark Twain (“Name the greatest of all the inventors: accident”), the stilted language (carried over from Dave’s Cave, 2018) seems particularly affected, and the two light-skinned cave guys, with their Flintstones-style animal skins and shaggy manes (Dave’s, for some reason, is green) certainly are. Still, it’s salutary to see an escalating conflict resolved in an amicable, even creative way, and a bit of wordless byplay in which a set of forest creatures invent a wheeled scooter with the discarded game pieces adds a droll finish. The diagrams the animals draw in the dirt make an especially funny counterpoint to the dialogue.

With ingenuity and good will, sticks and stones can be turned to better uses than breaking bones—but the tale demands readers who are patient with cavespeak.