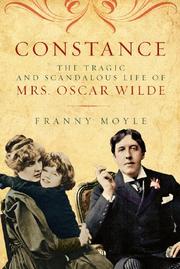 The Tragic and Scandalous Life of Mrs. Oscar Wilde

The little-known Constance Lloyd Wilde had some years of surpassing happiness with her gifted, controversial husband before scandal overwhelmed everything.

Former BBC arts producer Moyle (Desperate Romantics: The Private Lives of the Pre-Raphaelites, 2009) has a difficult task: keeping the focus on Constance when Oscar’s flamboyance, fame and flameout are so riveting. Mostly, she succeeds. The author begins in 1895 at a moment of great success and crisis: Oscar had two hits in the West End, but the scandal of his homosexuality was erupting, which would send him to prison for two years, destroy his reputation and career, and send his wife and two sons into exile to the continent, where they changed their surnames to Holland. After this emotional “teaser” of an opening, Moyle returns to tell the stories of her principals. Constance, whose wealthy father died when she was still a teen, suffered from her mother’s verbal and physical abuse. Nonetheless, she emerged as a bright, attractive, talented young woman whom Oscar met via her brother. Oscar, Moyle reminds us, had already lost one young woman—to Bram Stoker. Moyle carefully charts their courtship, marriage and parenthood. Initially, the Wildes were popular in society and helped each other in their work. Oscar was practicing journalism and writing poetry; Constance was involved in various women’s causes and wrote stories and essays. All looked well. Then…Lord Alfred “Bosie” Douglas. Oscar’s sexual passion for him consumed them all. Moyle shows us a bright, trusting woman who remained devoted even in some of the darkest hours.

Juicy literary history. The Wildes’ stories would have silenced the Prince in Romeo and Juliet, who said there “never was a story of more woe.”