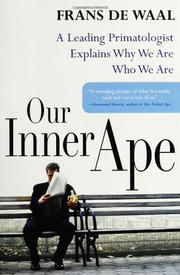 A Leading Primatologist Explains Why We Are Who We Are

Apes are our nearest relatives, and we have far more in common with them than we realize.

De Waal (Psychology/Emory Univ.; The Ape and the Sushi Master, 2001, etc.) has made a career of studying chimpanzees and bonobos, the two species closest to us on the evolutionary family tree. Many years of watching apes interacting—and paying close attention to individual apes—have revealed just how much of human nature arises from pre-human roots. We all recognize and mock the “animal” behavior of politicians and media stars ruled by the drives for sex and power. Chimpanzees are past masters of political infighting, and the easy sexuality of a bonobo tribe might make a Roman orgy seem sedate. But empathy and compassion are also part of our primate heritage, de Waal argues, offering plentiful examples—both anecdotal and rigorous—from his studies to support his point. He saw one zoo chimpanzee carry a stunned bird to the top of a tree and toss it in the air, trying to help it fly away. A chimpanzee mother, when the author showed an interest in her baby, carefully turned it around so the researcher could see its face. These and other observations show, he believes, that apes have the ability to see things from the point of view of others. The strong sense of community in a tribe of apes also appears to have a parallel in human groups—especially those living in small towns where everyone knows their neighbors. While the strongest ape usually rules his tribe, it is common for others to form alliances to resist a tyrant. De Waal extrapolates convincingly from his observations, many of which will surprise readers who think of apes as stupid brutes.

Fascinating and enlightening: It's hard not to conclude that, in many ways, apes may be wiser than their upright relatives.