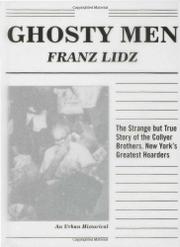 The Strange but True Story of the Collyer Brothers, New York’s Greatest Hoarders

Poignant, dark-humored account of the brothers who transported 140 tons of street stuff to their Harlem brownstone.

Homer and Langley Collyer lived at 128th Street and Fifth Avenue from 1909 until their deaths in 1947. They became ever more reclusive as the neighborhood went shabby on them, barricading and booby-trapping their home with midnight street pickings, creating a sanctuary of junk. But their unusual behavior, explains Sports Illustrated senior writer Lidz (Unstrung Heroes, 1991), was not lost on human-interest pages of the New York press, in particular Helen Worden, a reporter on the old World-Telegram who turned the odd fellows into a news story. The Collyers became known as the Hermits of Harlem, objects of attention to stone-throwing neighborhood children, to burglars, and ultimately to a rogues’ company of sheriffs, taxmen, and bank goons who wanted them out of the area. In Lidz’s hands, the brothers are unexpectedly sympathetic characters. Langley gave far from mad answers when questioned about his lack of a phone (“there’s no one in particular I want to talk to”), his crummy clothes (“dressed like this, no one ever molests me”), the bulwarks of junk (“the truth is that I barricade the windows to keep thieves out”). The author interlaces the story of his own Uncle Arthur, another substantial packrat, whom the youthful Lidz admired “for his commitment to extreme squalor,” his rejection of order and convention. Maybe touched, maybe crazy, these men defy Freudian analysis; Lidz’s sympathetic evaluation makes more sense: “They tried to build personal utopias behind drawn shades and locked shutters from oddments of their own childhood, mementos of their families, and parapets of newspapers . . . they found themselves trapped by their own fantasies.”

A welcome addition to Bloomsbury’s Urban Historical series, shimmering with dabs of color that bring the entire portrait to life.