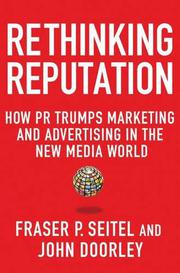 How PR Trumps Marketing and Advertising in the New Media World

A fun and educational discussion of building and protecting a reputation by two leaders in the field of public relations.

Seitel (The Practice of Public Relations, 11th Edition, 2010) and Doorley (co-author: Reputation Management: The Key to Successful Public Relations and Corporate Communication, 2006), the founding academic director of the Public Relations master’s program at NYU, assemble a set of case studies from the fields of business, politics and sports, and they separate their view of public relations from advertising and marketing. “Public relations,” they write, “is mandatory; advertising optional.” The authors show how it is now possible to build a successful international business in a short time without advertising. Susie Levitt and Katie Shea, student designers of CitySlips footwear, achieved this through networking among family and friends and using their Facebook and Twitter accounts to organize and expand their outreach. Other cases showcase the relationship between branding and reputation and how qualities of character, such as integrity, impact the performance of both business corporations and individuals. An example is Roy Vagelos, who developed a cure for river blindness and who, when he was made an executive at Merck, ensured the drug was made available where needed for free. The authors contrast Exxon's disastrous response to the Valdez oil spill with the different types of blunders made by BP's leadership during the Deepwater Horizon disaster, and they profile figures in sports and politics who have required PR help, including Kobe Bryant, Michael Vick, Bill Clinton and Anthony Weiner. Seitel and Doorley also highlight the integrity of Clinton's former press secretary Mike McCurry, and they use Paul Volcker's example of public service to derive their own Volker rule: “never spin.”

Lots of practical information for both building a business and living a life.