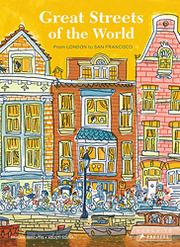 GREAT STREETS OF THE WORLD

From London to San Francisco

Readers are invited to wander Regent Street in London, La Rambla in Barcelona, Rynok Square in Lviv, Ukraine, and Hàng Bac in Hanoi, among others.

A well-traveled adult or even an armchair traveler may appreciate the lively sketches, emphasizing the architecture, transportation, and crowds in these busy urban sites. Will children? Perhaps not, despite the inclusion of some unusual global locales, such as the Rue de Bougounni, a large marketplace in Bamako, Mali, and Hatogaya, in Shirakawa, Japan, a historic street with “sloping, thatched roofs [that] prevent snow from piling up on top of the houses.” A few children are pictured having fun: Two kids play soccer in the Calleja de las Flores in Córdoba, Spain, and two other children make a snowman in the Japanese spread. Other kids are depicted walking alongside adults. The facts accompanying the illustrations are sometimes inadequate. The Anne Frank House receives prominent mention in the paragraph about Amsterdam’s Prinsengracht, but it’s impossible to tell whether it’s in the picture. The text about Calle 3 in Medellín, Colombia, mentions that “ten years ago, its residents barely dared to go outside” due to “the constant clashes between the army and drug gangs.” Without a specific year, the reference will be meaningless in the future. There is no map showing the various cities, nor any resources for readers motivated to learn more.