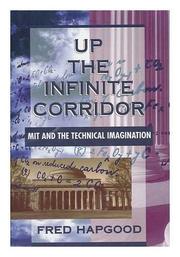 UP THE INFINITE CORRIDOR

MIT and the Technical Imagination

A history of MIT, doubling as a glimpse at the gonzo world of the modern engineer. The infinite corridor of the title refers to the 762-foot-long hallway that runs through five contiguous buildings behind the entrance hall of MIT, arguably the best science school in the world. But it also suggests the endless vistas of discovery that welcome those who join MIT's madcap, almost all-male, engineering fraternity. Hapgood (Why Males Exist, 1979) begins with a typical instance of this gang's by-the-bootstraps ingenuity, showing how an Armani-suited MIT inventor devises a gadget to turn sheets on a music stand while the musician keeps his hands on his instrument. The essence of the method is trial-and-error, plus a massive dollop of intuition—but it wasn't always like this. MIT was founded in 1865 for ``tweakers,'' engineers who made incremental improvements in existing systems. Pure research and breakthrough invention were kept in the closet until WW II, when radar was developed by MIT physicists. Since then, the school has cultivated a ``nerd'' ethos much celebrated by its students, who hold an annual ``Ugliest Man'' contest. Tensions with the arts-and-letters crowd, especially at neighboring Harvard, remain strong. Both faculty and students suffer from burnout and find relief in frivolities like square dancing and model railroading (both hobbies becoming unimaginably complicated in their MIT versions). As Hapgood demonstrates most entertainingly, MIT's essentially juvenile values—``communal bonhomie, irreverence, high tolerance for goofiness, belief in the power of fantasy, and an insistence on having total control of their own world''—have led to several major scientific revolutions, not least the age of computers. A informative look at current MIT research into holography, artificial limbs, computer driving, nanotechnology (hyper-miniaturization), and, inevitably, game-playing round out this bouncy report. Geeks and gadgets, from an admirer.