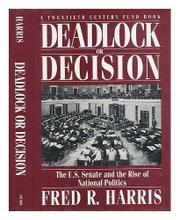 The U.S. Senate and the Rise of National Politics

An important, if ponderous, inquiry into the Senate's evolution, its periods of influence and decline, and its urgent need for self-reform. Harris (Political Science/University of New Mexico; Potomac Fever, 1977, etc.) knows whereof he speaks: He's a former Democratic senator from Oklahoma. The author's concept of the ``nationalization'' of US politics—in which TV, rapid travel, and fast transmission of news have made the country a single community—is useful. Today's sometimes dysfunctional Senate, he explains, has been shaped in part by positive developments—a better-educated electorate with more interest in government, and greater media scrutiny of Senate activities. But despite Harris's reverence for what he continually calls the ``world's greatest deliberative body,'' he admits that the Senate is in bad need of reform. Legislation is held up endlessly in committees, in procedural wrangles, and by grandstanding lawmakers; the budget-making process is highly inefficient; lobbyists have a lock on senators, whose pay, Harris says, is insufficient to live on; extremism slows formation of consensus; campaign strategists pander to the worst in the electorate; and campaign finance laws are widely abused or evaded. Certain Senate powers—the ratification of treaties and confirmation of judges—have grown with time, but the Senate, Harris says, desperately needs to be restored to its place as party with the President to all military decisions before many more Koreas or Vietnams pass. Harris's analysis of the deficit crisis shows that the Senate has actually made strides in reducing the debt—if not the public-relations monster the issue has become. Descriptions of the Senate's early history are fascinating, but the text as a whole is in want of color and illustrative anecdotes; summary remarks at each section's end are highly repetitive. A effective overview of the Senate's history and development, making clear how reform of this once-august institution could profit the country immensely.