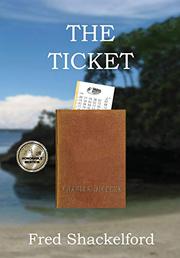 In this thriller, a Virginia lawyer’s desperate search for a missing lottery ticket worth millions puts his estranged wife and others in danger.

Attorney Channing Booker has just won the lottery, which is a massive $241 million before taxes. But he’s not ready to celebrate just yet. He knows a divorce from his wife, Susan, is imminent, and he doesn’t want to split the fortune. He’ll report the win later with his lawyer friend’s assistance, stashing his ticket in one of Susan’s rare Charles Dickens books. But Channing returns home the next day to find Susan gone, along with some furniture and every Dickens novel. Susan has good reason to leave: Channing, a gambler and habitual drug user, has been physically abusing her. That she’s completely unaware of the ticket doesn’t stop Channing’s hunt for the books. Keeping mum about the valuable bookmark, he enlists the help of loathsome pawn shop owner Billy Scaggs and contends with a nosy attorney at his firm, who assumes Channing is up to something shady. Meanwhile, a sudden car accident threatens to derail Susan’s escape plans. And as Channing’s 180-day period for turning in his ticket gradually diminishes, his despair may escalate into violence. Shackelford (Judges Say the Darndest Things, 2004) provides his story with a dizzying tempo, as he piles on various obstacles for both Channing and Susan. There are perspectives from multiple characters, but they primarily shift between the estranged couple and Lee Barnett, a retired detective who somehow secures evidence of the lottery ticket’s existence. Characters throughout are notable, as even seemingly minor players have solid backstories. But the most indelible are Billy, who’s frighteningly good at tracking down information, and Lee, a flawed potential hero whose pursuit of the ticket involves theft and breaking and entering. The author’s breezy prose is free of obscenities and graphic specifics of brutality, including during the intense final act. Although the inevitable encounter involving the main characters results in a well-earned climax, a romance between two of the players is short and somewhat contrived.