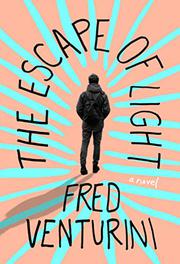 THE ESCAPE OF LIGHT

A high school student with burn scars explores his identity in a coming-of-age tale full of surprises.

Wilder Tate is a self-proclaimed basketball junkie from small-town Illinois who is haunted by a childhood incident resulting in burn scars on much of his upper body and face. At the start of high school, he seemingly has it all—a defense position on the basketball team and a cute cheerleader on his arm. But Wilder soon discovers that his good luck is an illusion, and he decides to try to “fix” his scars through tissue expansion. When an accident threatens his recovery, the story shifts into more genuine, heavy territory. Wilder is surprisingly wise and reflective for his age, but his ordinary teenage experiences, as well as his struggle to embrace an identity that may or may not include his scars, will undoubtedly leave readers rooting for him. Characters who originally seemed to disappear into the story’s background are reintroduced later as multilayered people who blur lines between good and bad and have storylines of their own that beg to be expanded. Readers unfamiliar with basketball may find the lingo hard to follow, but that doesn’t lessen the novel’s impact. The book follows a white default.

Rich narrative and (eventually) characters make for a stunning read for a wide audience.