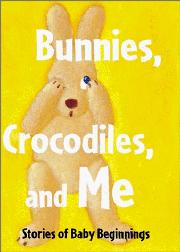 BUNNIES, CROCODILES, AND ME

The cuddly baby bunny image on the jacket is not the most representative sensibility of this collection of tales written and illustrated by European artists—Peter Allen, Catherine Benas, Anne Brouillard, Alain Crozon, Gilles Eduar, Pascal Estellon, Katja Gehrmann, Bruno Gilbert, and Muzo—who tend more toward the wild and woolly. The first tale by Eduar is a truncated scheme of evolution, which gets people onto the scene with dispatch, then sets them off on little, ocean-going rafts to “see what they would see.” That answers the unstated premise question of the project, “Where did I come from?” with the same visual and textual abandon of many of the tales. Gehrmann’s “Me,” for example, may be best described as an Expressionistic cutaway of the gestation and birth of a calf. Muzo’s little monster, also seen in cutaway, doesn’t want to be born at all until its big brother promises a fight. Offerings for the very youngest children include a quick counting story by Allen, “1 to 10 in the Maternity Ward,” and an object identification chart of what’s “In My Suitcase.” Brouillard’s “Lots of Little Things” is very French in mien and mood, full of atomistic musings. There is something here for nearly every taste and developmental level, ideal for readers who don’t object to being dropped abruptly into a strange, fantastic, richly textured rabbit hole. (Anthology. 3-8)