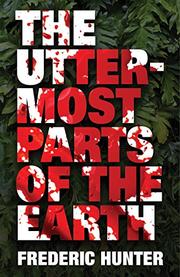 THE UTTERMOST PARTS OF THE EARTH

Matters of the heart overpower a missing person case in a Central African village.

As has been true of generations of African-Americans stung by white racism, Kwame Johnson, a New England–bred black professor of African literature, is both romantic and inquisitive about life in his ancestral homeland. He is given a chance to satisfy his curiosity by taking a post as a cultural officer with the United States Information Service in Kinshasa. The time is the late 1990s, when the Congo was still known as Zaire, in the waning days of Mombuto Sese Seko’s brutal dictatorship. From the moment Kwame arrives in the country, he has the sense, familiar to generations of African-American visitors, of being quite foreign to Africans despite his skin color. (“I am here, he thought, but I am still out of place.”) Just after he arrives, he's sent on a visit to Mbandaka, a remote village where he's supposed to learn the ropes while working with a white USIS officer named Kent Mason—but Mason doesn't show up to meet him at the plane, and no one knows where he's gone. Kwame combs through everything the man left behind; papers, books, letters, photos, even clothing. But he's distracted from whatever implications or intrigue surround Mason’s unexplained absence by the people he meets in Mbandaka: a few white Belgians, including an embittered landowner and his libidinous wife, and, more notably, a Nigerian doctor named Olatubusun Odejimi, who introduces him to the arcane pleasures of hemp and breakfast whiskey—and has many lovers among the locals, including the landowner’s wife. Another of Odejimi’s lady friends is Madame Vandenbroucke, a sultry, enigmatic Congolese once married to and then abandoned by a white European. Kwame finds himself falling in love with Madame Van, to the point of wanting to marry her, despite his being engaged to a wealthy WASP woman back in the U.S. Hunter, who's white, was once a USIS officer assigned to the Congo and an Africa correspondent for the Christian Science Monitor; he's mixed romance and intrigue before in Love in the Time of Apartheid (2016). His dry, straightforward tone doesn’t always serve him well in characterization or in the more erotic interludes. But his book is most rewarding in its shrewd assessments of cross-cultural mores and manners.

Hunter invokes Joseph Conrad toward the start of this book, underscoring how much this region near the equator has changed while still retaining its mystery to outsiders, no matter what color their skins.

ALL THINGS MUST FIGHT TO LIVE
by Bryan Mealer
Nonfiction