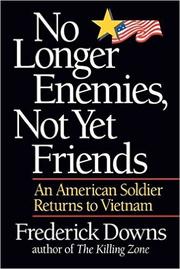 NO LONGER ENEMIES, NOT YET FRIENDS

An American Soldier Returns to Vietnam

An erstwhile warrior's powerful and thought-provoking report on his unsentimental journeys to Vietnam 20 years after a wounding tour of combat duty. Between 1987 and 1989, Downs (Aftermath, 1983; The Killing Zone, 1978) made five trips to Hanoi in his capacity as the VA's director of prosthetic and sensory aids. A decorated veteran who lost his left arm during a 1967-68 stint as an infantry lieutenant, he was a member of the so-called Vessey mission, which explored opportunities to provide the Communist regime humanitarian assistance (from nongovernmental organizations) in return for franker discussions of POW/MIA issues. Once back in country, the author found to his surprise that he had embarked on a voyage of self-discovery. Initially determined to focus on ways to furnish medical help to a backward, dirt-poor nation, Downs soon found himself drawn to his sometime foes by a sense of shared pain and loss. In his chronological journal, the author offers perceptive accounts of two sets of travels—the semiofficial efforts of former antagonists to move toward rapprochement, if only at a low level, and the personal odyssey that gave him an appreciation of the need for healing. The tough-minded narrative has a full measure of acute observations on latter-day Vietnam, as well as reflections on the casual brutalities committed by American soldiers during the war. Downs also recounts the revelatory visit to the US of a battle- hardened North Vietnamese surgeon whom he guided around Washington, D.C., and welcomed into his Maryland home. While he deals summarily with home-front opposition to the Vessey mission, the author leaves little doubt that he and colleagues were puzzled, even hurt, by the ad hominem attacks that dogged them in the States. A masterful storyteller's cleareyed tribute to the postbellum reconciliation. (Photographs—not seen.)