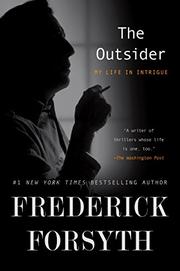 My Life in Intrigue

Acclaimed thriller writer Forsyth (The Kill List, 2013, etc.) delivers a charming autobiography about his real-life adventures around the globe.

The author was raised during the Blitz, and he describes a childhood of routine bombardment, constant fires, and a tank parked in his backyard. Forsyth became obsessed with the Royal Air Force, and he eventually enlisted. But he seemed destined to write tales of suspense: he learned several languages, became a foreign correspondent, and traveled the world in search of stories. In Germany, he accidentally shared a drink with a Nazi war criminal. In France, he covered the near-assassination of Charles de Gaulle. In Nigeria, he found himself stuck in the middle of the Biafran War. The book is a patchwork of anecdotes told in the meandering style of an elder Englishman. Forsyth’s tales of derring-do are a pleasure to read, especially when coupled with his self-deprecating humor, but his most endearing quality is his ravenous curiosity, which pulled him from one exotic location to another. When he visited the Negev Desert, not long after the 1948 war, he interviewed an aged veteran who had spent decades fighting for the creation of Israel. “He stared for several seconds, then came alive, as if jolted by an electric shock,” writes the author. “I could have filled ten notebooks, but I just sat and listened to an old man who was sixty years of living history and who had seen it all.” Forsyth has also seen it all, and though his sometimes-rambling memoir has no overarching message, he explains how a dreamy London youth ended up writing some of the world’s most famous thrillers. When Forsyth recounts the moment he typed the title The Day of the Jackal for the first time, fans may find themselves misty-eyed.

Reading The Outsider is like listening to a grandfather recount his exploits in front of the fireplace: the narrative is occasionally long-winded and self-satisfied, but after living such an exciting life, Forsyth has earned his bragging rights.